Optical chips have been tried before—but the rise of deep learning may offer an opportunity to succeed where others have failed.

by Will Knight
Nov 28, 2018
Inside a small laboratory in Boston’s seaport district, buried within a jumble of lasers, lenses, mirrors, and a tangle of wiring, is a tiny chip that might be about to have a big impact on the world of artificial intelligence.

The lab belongs to Lightelligence, a startup that’s developing a radically new kind of AI accelerator chip. Instead of using electrons to carry out the core mathematical computations needed for machine learning, the company’s prototype device uses light.

In theory, transferring information at the speed of light means such a device could let AI algorithms run hundreds of times faster than today’s best AI chips. Since raw computer power makes such a difference in machine learning, this could mean vastly more powerful and capable algorithms. In practice, though, the speed of the optical chip will depend on how quickly it can interact with conventional components, like a computer’s memory. And Lightelligence needs to write algorithms that can wring as much speed out of the setup as possible.

Deep learning, a machine-learning approach loosely inspired by the way brains are wired, has taken the tech industry by storm in recent years. It has proved incredibly powerful for training machines to do valuable tasks like labeling images and translating text. Companies, meanwhile, are racing to deploy the method in more and more useful ways.
The rise of deep learning has already sparked a boom in commercial activity around new chip designs optimized for the key mathematical calculations involved. Now it appears it’s inspiring fundamentally different approaches to computing, too.
I recently visited Lightelligence to meet with its CEO, Yichen Shen, a confident man in his 20s. Wearing a fleece sweater and a broad grin, he introduced each of the company’s dozen or so employees and then showed me around the lab. 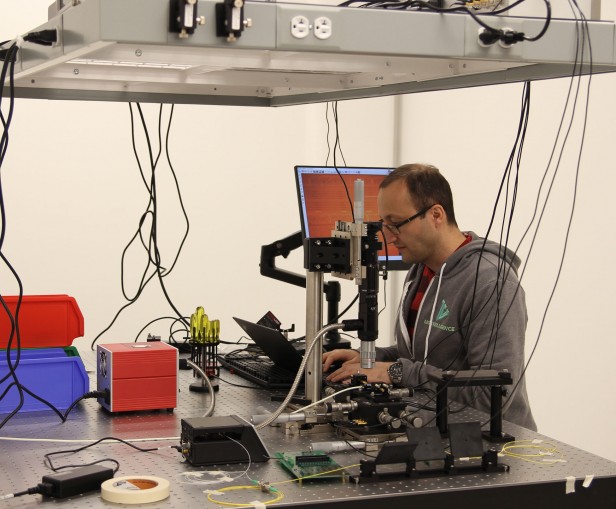 Arash Hosseinzadeh of Lightelligence works at an optical bench in the company’s lab.

Light offers key advantages for AI, Shen explained. Photons are faster than electrons, and their movement through a chip’s circuitry won’t overheat it. But computing with light is also very challenging. Previous efforts to build optical computer chips have failed because it’s difficult to emulate a transistor optically and because light behaves in a less predictable way.
But the equation is changing in the era of deep learning, Shen says. Optical chips are well suited to performing matrix multiplications, calculations that are central to deep learning. Neural networks are also inherently linear, and it’s linear computations at which optical devices excel.

Shen says he and his colleagues at Lightelligence recently sent their first finalized chip design to a manufacturer and expect the first chips back in a few weeks. “We think it’s a very unique and interesting opportunity to test this idea out,” he says.

Researchers are exploring all kinds of new opportunities in materials and optics. Earlier this year, a team of researchers at UCLA developed a novel deep-learning device created by 3-D-printing different refractive polymers. Details of the team’s device, dubbed a diffractive deep neural network (D2NN), were published in the journal Science.

Commercializing the technology may also be more practical now than it was before.

Dan Hutchinson, an analyst at VLSI Research who tracks innovative chip designs, says interest in novel optical chips is growing thanks to progress in the design and manufacture of devices used for networking. Optical chips are also relatively easy and cheap to make, which lowers the barrier to entry for startups, he says.

Lightelligence will still face big challenges, though. Zhangxi Tan, a veteran of the chip industry and CEO of another chip startup, OURS Technology, says even if the chip works as promised, it could prove difficult to manufacture at scale. It will be a challenge to package and test a completely new chip design, especially when no good software design tools exist for such an optical device. “Light is very elegant on paper, but the surrounding electronic circuits—your laser drivers, photon receiver circuitry, electronic modulators—are very ugly,” Tan says

Nevertheless, the effort is moving quickly.

Only last year, Shen was a PhD student studying photonic materials in the lab of Marin Soljacic at MIT. Together with Soljacic and several other students, he published a paper in the journal Nature Photonics describing a new way to perform neural-network computations using optical interference. The idea for a company was hatched before the paper was even published, thanks to a call from a West Coast venture capitalist.

The company also has a sibling rival. Lightelligence was formed when Shen and others defected from a company called Lightmatter. The CEO of Lightmatter is one of Shen’s coauthors on the original paper, and that company has raised similar amounts of funding for its own optical deep-learning chip. Perhaps a healthy rivalry might help speed along development of the technology.

There are significant hurdles ahead, but if one of these companies can overcome them, it might just light up the world of AI.